The altar of the street chapel was probably transferred from the old church (demolished in 1826) which stood in this area of Koper (called Bošadraga).

A new painting (the work of an artist from Koper Bartolomeo Gianelli) replaced the original Baroque painting (which decayed) and in 2017, a painting by Tomaž Perko titled Bošadraška Marija (Mary from Bošadrago) was hung in its stead. This painting depicts the mother of Jesus, who carries a starfish in her left hand (Mary is namely the patron of sailors, oftentimes known as Stella Maris – starfish), while the image of Koper is depicted in the background. 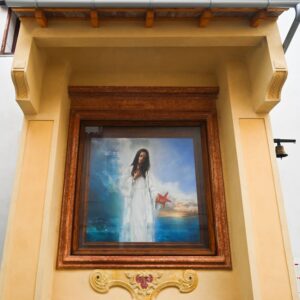