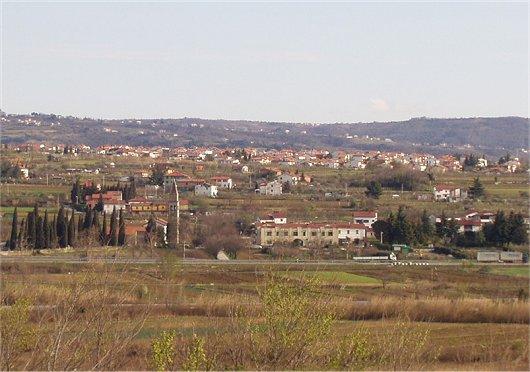 Bertoki will attract your views with a beautiful tree-lined road near the baroque parish church of the Assumption of Mary, beside which stands a 29 metre-high bell tower.

There is a facility nearby that was previously used as a hospital, and later as a summer residence of aristocratic families of Koper. In the old part of Bertoki, you can also see the fountain of the Istrian waterworks from 1935.

There also ran a route of the Venetian road with two still legible sections. The road, which runs from the medieval boarder with the territory of Trieste to Bertoki, was renewed in 1776 on the order of A. Delphino. Nearby is a stone pillar with the relief of the Venetian lion, which holds the emblem of the Delphino family in his paws.

The village also boasts the Panajotopulo Mansion – a baroque complex of a former mansion from the second quarter of the 19th century. The palace is supposed to be built by the Gravisi family, which supposedly used it as a summer residence.

The outbuilding “Med vinogradi 30” is a large, multi-purpose building from the 19th century with arcade shed, that belonged to the former settlement of Kortina.

Between Bertoki and the current Port of Koper, used to be salt pans, now there is the Škocjanski zatok nature reserve.