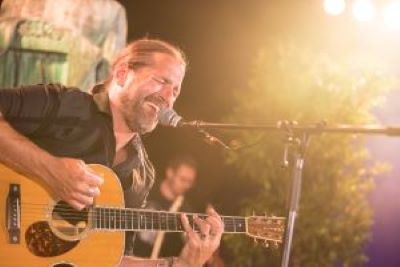 The five original members of Tribute 2 Love gathered in 2006, in 2013 legendary guitarist Matej Mršnik (ex-Laibach) joined the band for a short time, and in 2017 the great guitar virtuoso Peter Dekleva. Their club and big stage performances are a real musical treat, solid in rhythm and fluid in musical improvisation. A reminiscence of blues roots echoes in the background of their music. A number of original compositions act as a free-floating music archive dating back to the 1940s and 1950s, in which listeners – even those who are not (yet) familiar with music history – can discover the fundamental musical patterns on which modern music rests.

The songs, although sometimes pop like and extremely “infectious”, blend perfectly with the blues-rock tradition; are the points where the band Hamo & Tribute 2 Love found intensive contact with the current Slovenian audience and its everyday life.

The event will take place in The “St Francis of Assisi” Ceremonial and Entertainment Hall. In consideration with the NIJZ regulation and a valid COVID certificate.