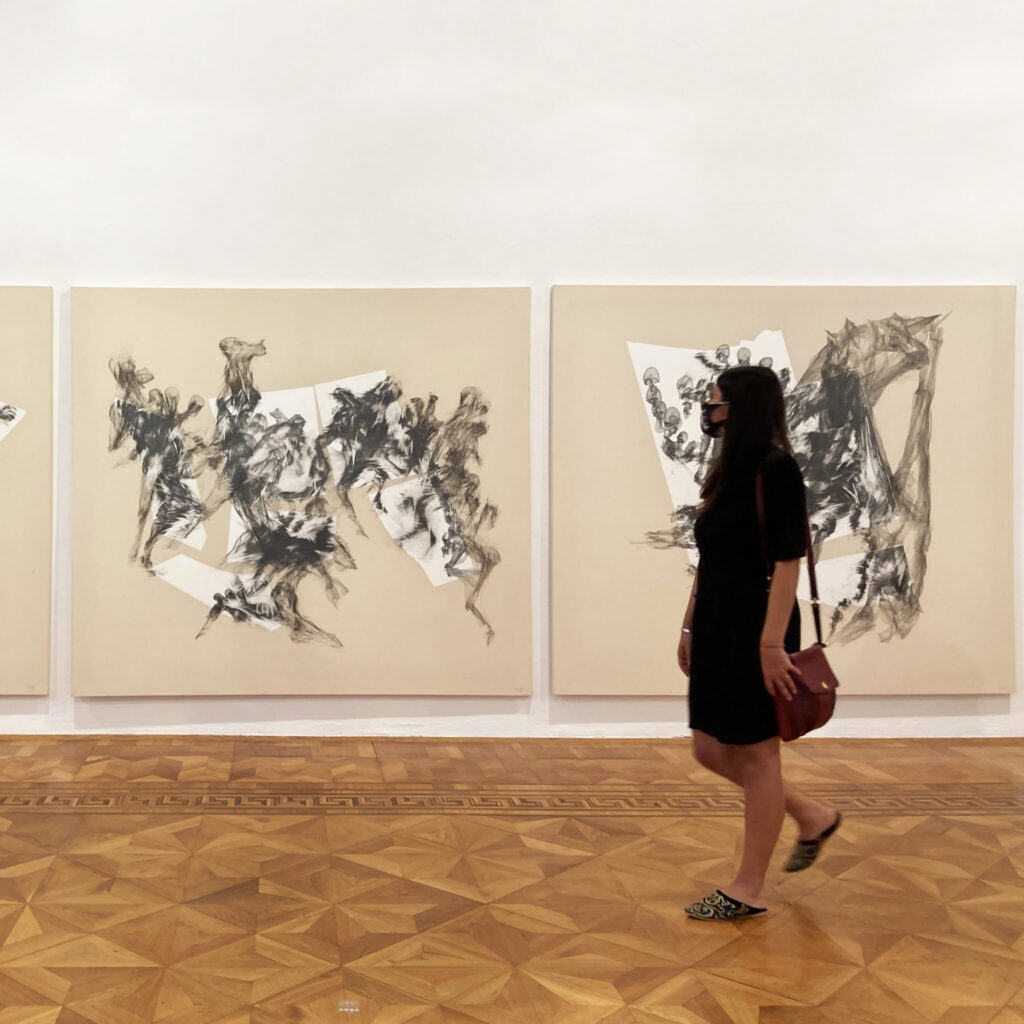 The solo show of the Tilen Žbona includes some of his most recent artworks, which interact with the surrounding space through digital images. The author, native of Koper, maintained the artistic positions he developed at the beginning of his career, when he started combining classical painting with new media. Back then Srečo Dragan, Slovene filmmaker, and professor of Žbona at the Academy of Fine Arts and Design of the University of Ljubljana, placed the young artist between the most talented young members of Intermedia Art. Tilen held his first solo exhibition at Piran Coastal Galleries, where he displayed a series of paintings with his video installation Hybrid Subjects at the Meduza Galley and at the Gravisi Palace, both in Koper.

“Even in the most recent artworks (2020-2021), the energy of his artistic beginnings is quite noticeable: it materializes in the restless but controlled stroke of black lead, which creates human figures, and in the physicality of plaster. The visual impact of his paintings, enriched by collages, drawings and painted elements, follows the leitmotiv of desert sand, a colour that bears their material language and its unequivocally expressionist origin, in particular with the undefinable anatomy of their deformed bodies”. (Majda Božeglav Japelj)

Tilen Žbona (1976) graduated in painting at the Academy of Fine Arts of Venice under the guidance of Professor Carlo di Raco and obtained the master in New Media at the Academy of Fine Arts and Design of the University of Ljubljana with Professor Srečo Dragan. In 2012 he received an official award for his works from the University of Ljubljana, and since 2015 is member of the Artistic Committee for the Slovenian Rectors Conference. In 2017 he achieved his Ph.D in Educational Science at the faculty of Social Pedagogy of the University of Ljubljana, under the guidance of Dr. Beatriz Gabriela Tomšič Čerkez and Prof. Dr. Franc Solina. He is associate professor at the faculty of Education of the University of Primorska. He took part to numerous national and international festivals, such as: Pixxelpoint, Nova Gorica (Slovenia), Istanbul Biennial (Turkey), ArtNetLab & Le Génie de la Bastille, Paris (France). He lives and works in Koper.