Capodistrias Square, located on the former courtyard of the monastery of St. Claire, bears the name of the first Greek governor, Ioannis Kapodistrias.

In the square, you can admire a life-size statue of the governor, donated by the Greek government in 2001.

The ancestors of Ioannes Kapodistrias, Minister of Foreign Affairs in imperial Russia and the first president of the Greek republic (between 1828 and 1831), were originally from Koper. He was murdered in 1831; his brother Augustinos Kapodistrias became the governor after his death.

Located near the square is the former monastery of St Claire with its church, built in the Middle Ages (13th–14th century) and expanded in the 16th century. The single-nave church was built in the 17th century and decorated in the Baroque style.

Nowadays, the Koper Regional Archive is housed in the monastery of St Claire. 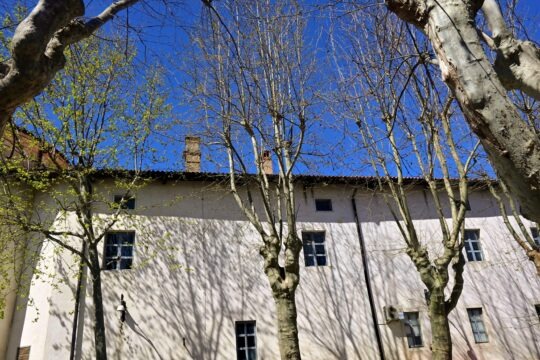